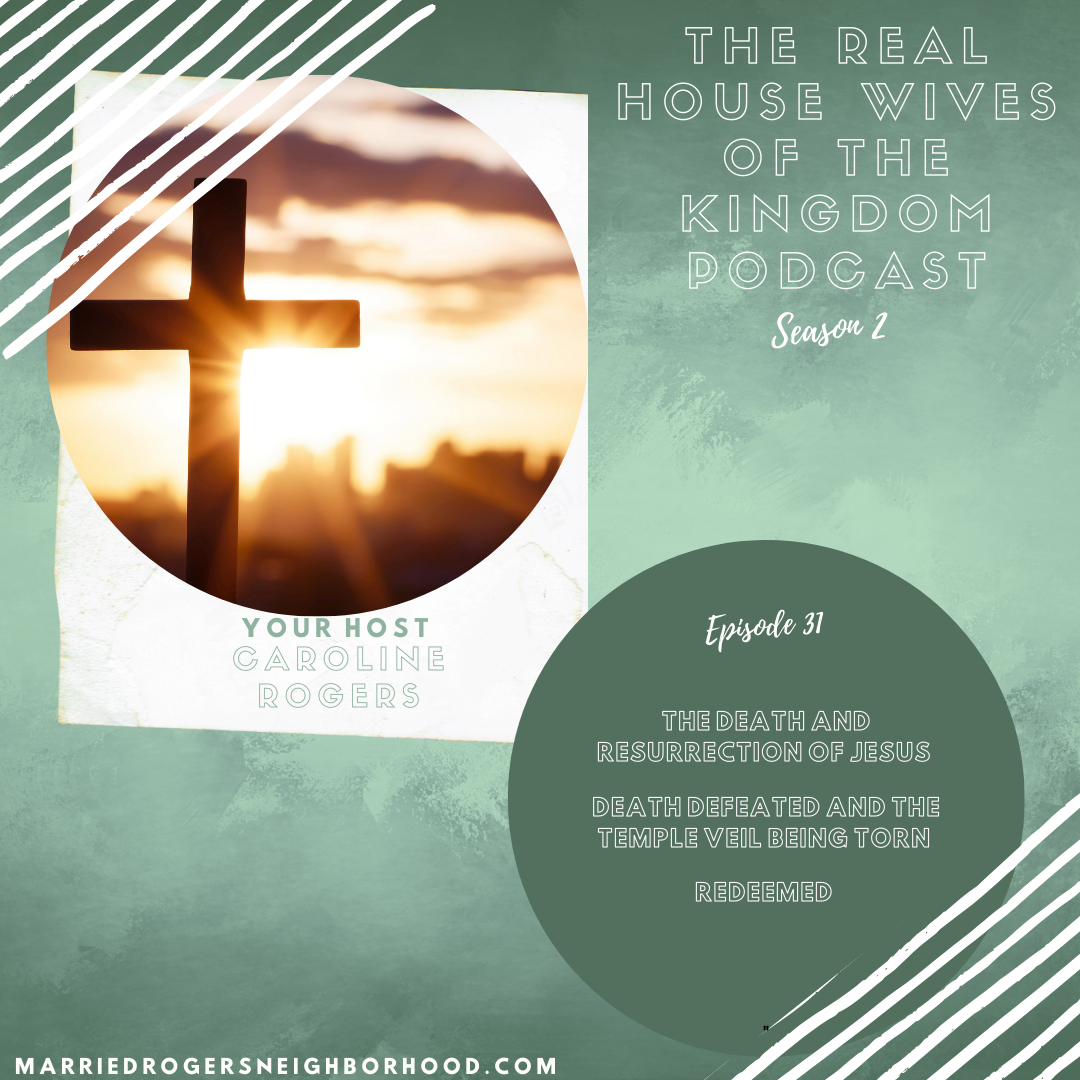 Episode #31-What is Easter Sunday all about? What the death and resurrection of Jesus means to me, and what it means for you. Understanding the significance of the temple veil being torn in two.

What is the significance of Easter Sunday? Why is Easter Sunday celebrated? What is Good Friday? Why do we celebrate both the death and resurrection of Jesus?

Toady I’m talking about why I celebrate Easter and what the death and resurrection of Jesus means to me personally, and what it means for you. I also dive into the veil of the temple being torn and why that is so significant. Listen in everyone, this is truly the best news!

We all need forgiveness. Since Adam and Eve decided to disobey God. Prior to the fall, Adam and Eve walked and lived with God. They were without blemish until they ate from the tree of the knowledge of good and evil. Suddenly they realized they were naked and felt shame. This was the first sacrifice, God killed one of the animals He had created. The very same animal that Adam was in charge of. To cover their nakedness.

Also for Adam and his wife the Lord God made tunics of skin, and clothed them.Then the Lord God said, “Behold, the man has become like one of Us, to know good and evil. And now, lest he put out his hand and take also of the tree of life, and eat, and live forever”—

God is Holy, we made the choice and it put a barrier between us and God. The fact that God gave us a choice shows His love and the dignity He gives us. As a kindness He no longer allowed us to eat from the tree of life, which would have allowed Adam and Eve to live forever. Can you imagine and endless life amidst the sin we see in the world today?

What helped me understand my need for Jesus at a young age?

I talked in the Podcast about a traveling show called “Toy Makers Dream”. It came to my church when I was young and gave me such a great visual for what happened in the garden and what Jesus did for me on the cross.

The Prophesy Of Christs death and resurrection

In December on Episode 16, I talked about the birth of Jesus and how the Prophet Isaiah wrote and talked about everything that would take place more than 700 years before Christ’s birth. He also spoke of His death and resurrection in Isaiah 53

In Exodus God gave Moses specific instructions on the Temple and how the children of Israel were to approach Him, and be in relationship with Him. The veil was to separate the most Holy of Holy’s where God’s Spirit dwelled, and only the Levite priests who had been sanctified would approach and offer sacrifice for God’s people. This was no small veil.

“You shall make a veil woven of blue, purple, and scarlet thread, and fine woven linen. It shall be woven with an artistic design of cherubim. You shall hang it upon the four pillars of acacia wood overlaid with gold. Their hooks shall be gold, upon four sockets of silver. And you shall hang the veil from the clasps.

Why is this significant? Read what happened while Jesus was being crucified.

Now when the sixth hour had come, there was darkness over the whole land until the ninth hour. And at the ninth hour Jesus cried out with a loud voice, saying, “Eloi, Eloi, lama sabachthani?” which is translated, “My God, My God, why have You forsaken Me?”Some of those who stood by, when they heard that, said, “Look, He is calling for Elijah!”

Then someone ran and filled a sponge full of sour wine, put it on a reed, and offered it to Him to drink, saying, “Let Him alone; let us see if Elijah will come to take Him down.

”And Jesus cried out with a loud voice, and breathed His last.

Then the veil of the temple was torn in two from top to bottom. So when the centurion, who stood opposite Him, saw that He cried out like this and breathed His last, he said, “Truly this Man was the Son of God!”

A 30 foot by 30 foot curtain 4 inches thick is torn from top to bottom, not a coincidence. Suddenly God removed the barrier between us and Him. Now after we accept Him as our Lord and Savior, we are the Temple of the Holy Spirit. We have access to God any second we need it!

This is the centerpiece of Easter Sunday. While His death was necessary, His resurrection is the proof in the punch. Death Defeated. Both were prophesied to happen by the prophets and by Jesus himself.

First He showed himself to the women

Now after the Sabbath, as the first day of the week began to dawn, Mary Magdalene and the other Mary came to see the tomb. And behold, there was a great earthquake; for an angel of the Lord descended from heaven, and came and rolled back the stone from the door, and sat on it.

His countenance was like lightning, and his clothing as white as snow. And the guards shook for fear of him, and became like dead men.But the angel answered and said to the women, “Do not be afraid, for I know that you seek Jesus who was crucified. He is not here; for He is risen, as He said.

Come, see the place where the Lord lay. And go quickly and tell His disciples that He is risen from the dead, and indeed He is going before you into Galilee; there you will see Him. Behold, I have told you.

”So they went out quickly from the tomb with fear and great joy, and ran to bring His disciples word. And as they went to tell His disciples, behold, Jesus met them, saying, “Rejoice!” So they came and held Him by the feet and worshiped Him. Then Jesus said to them, “Do not be afraid. Go and tell My brethren to go to Galilee, and there they will see Me.”

This is the good news, the very best news! The Significance of Easter Sunday is that Jesus humbled Himself, became man though He was still fully God. Experiencing everything we do from childhood to adulthood. We can be confident He understands out plight. He became the sacrifice for us, He covered us.

Do you want to be saved?

He revealed Himself many more times before ascending into heaven. He continues to reveal himself to you an me everyday. Just like in the garden we have the choice to accept His very precious gift or to reject it. Don’t be fooled, there is no in between, you are either for God or against Him.

For the wrath of God is revealed from heaven against all ungodliness and unrighteousness of men, who suppress the truth in unrighteousness, because what may be known of God is manifest in them, for God has shown it to them.

For since the creation of the world His invisible attributes are clearly seen, being understood by the things that are made, even His eternal power and Godhead, so that they are without excuse, because, although they knew God, they did not glorify Him as God, nor were thankful, but became futile in their thoughts, and their foolish hearts were darkened.

How can you be saved?

It takes more than just saying you believe, truly you must desire to be in relationship with Him. That first Sunday changed everything, we were doomed to eternity separated from our Creator. Just when everything was darkest God broke through the pain of sin and death and rescued us. Bringing us back into fellowship with Him!

if you confess with your mouth the Lord Jesus and believe in your heart that God has raised Him from the dead, you will be saved.

For with the heart one believes unto righteousness, and with the mouth confession is made unto salvation.  Scripture says, “Whoever believes on Him will not be put to shame.

” For there is no distinction between Jew and Greek, for the same Lord over all is rich to all who call upon Him. For “whoever calls on the name of the Lord shall be saved.”

What does celebrating Easter look like all year long?

Our world can be very distracting. The enemy constantly tries to make us forget and almost disregard our need for forgiveness and God’s beautiful gift of Salvation. Things like depression, anxiety and suicide are running rampant even among Christians who know the good news. Why? The enemy has crept in and begins to drown out the good news.

Walk with Jesus today, talk to Him, read His Word and get to know His character. Thank Him for all He has done. Then, wake up and do it again tomorrow! If you haven’t already accept His gift of access to the Father, a broken barrier. Cast your burdens on Him, He cares for you! Happy Easter Everyone!

Discerning God’s Call and Bravely Stepping out in Faith

The Enneagram it’s a tool