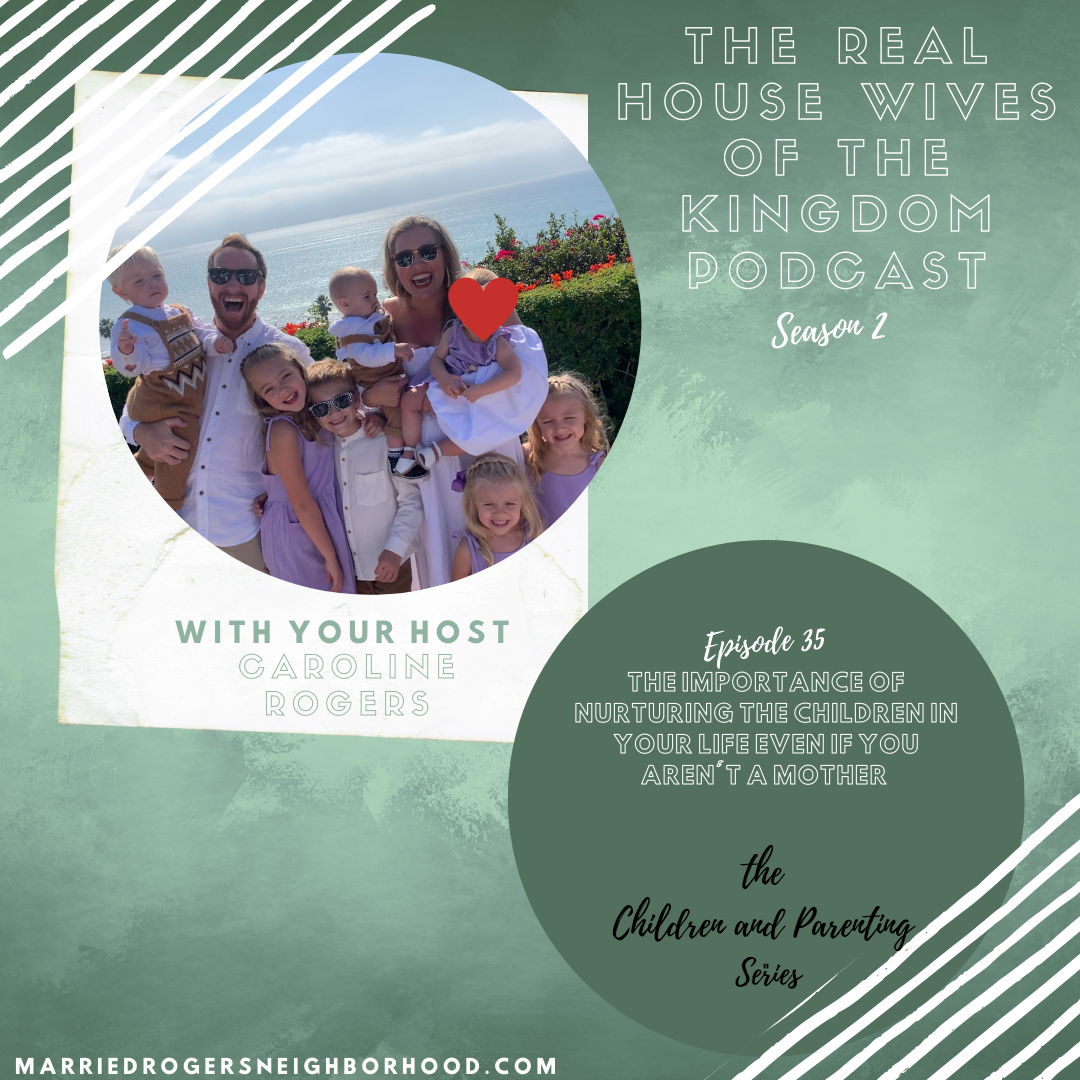 Podcast Episode #35- The importance of nurturing children in your life even if you aren’t a Mother-Real House Wives of the Kingdom, Children and Parenting Series

Mothering even if you aren’t a Mother

Nurturing children even if you aren’t a parent, I believe is a call from God.

I am not a Mom, which may make you wonder why I’m having a series on Children and Parenting.

(You can read about and listen to the first in my children and Parenting Series, “Loving your Prodigal Child” Here)

Just because you aren’t a Mother doesn’t mean you aren’t called to Mother.

Let the Little Children come to me

Today I’m talking about why I think children are an important part of God’s plan and how just because you aren’t a parent doesn’t mean you won’t be held responsible for the influence you have on the children that are in your life.

In Mark Jesus gives His disciples a lesson on the importance of children in the Kingdom of Heaven.

Then they brought little children to Him, that He might touch them; but the disciples rebuked those who brought them. But when Jesus saw it, He was greatly displeased and said to them, “Let the little children come to Me, and do not forbid them; for

of such is the kingdom of God. Assuredly, I say to you,

by no means enter it.” And He took them up in His arms, laid His hands on them, and blessed them.

Even if we have decided to not have or raise children of our own, we should want to treat them with love and respect. As believers or Christ followers how can you not?

Choosing our influence, for good or for evil

While we have been given the gift of free will, this does not mean our actions don’t have consequences. The words we speak and our actions have a direct impact on those around us, especially children.

They are little sponges, they are watching, listening and understanding far more than we realize. Why is this important?

Jesus talked taught, if anyone causes a child to sin it would be better if a rock were tied around his neck and he were drown in the sea:

At that time the disciples came to Jesus, saying, “Who then is greatest in the kingdom of heaven?”

Then Jesus called a little child to Him, set him in the midst of them, and said, “Assuredly, I say to you,

unless you are converted and become as little children, you will by no means enter the kingdom of heaven.

Therefore whoever humbles himself as this little child is the greatest in the kingdom of heaven. Whoever receives one little child like this in My name receives Me.

“Whoever causes one of these little ones who believe in Me to sin, it would be better for him if a millstone were hung around his neck, and he were drowned in the depth of the sea. Woe to the world because of offenses! For offenses must come, but woe to that man by whom the offense comes!

If you are deemed safe by their parents and in close proximity to children in your life, don’t take this lightly.

Using your power for good

When nurturing children even if you aren’t a parent, you are doing God’s work.

Why not take the opportunity to not just watch what you say but to use your words to build up! Also how can you best support your friends who are in the hard holy work of parenting.

Listen to the whole Podcast for some tips and encouragement on how you can honor God by enriching the lives of the kids around you, helping equip them for all God has in store!

Just because you aren’t a Mother doesn’t mean you aren’t called to Mother.

Follow and interact with Caroline on social platforms at:

(We promise not to spam you)

If you would like more information on Jamie’s Song Writing and performing services you can ask Caroline on any of the above platforms listed for her official contact info.

Hosting guests without loosing your mind and your good intentions

Communication, a How to before you say “I Do”

Celebrating Christmas around the World