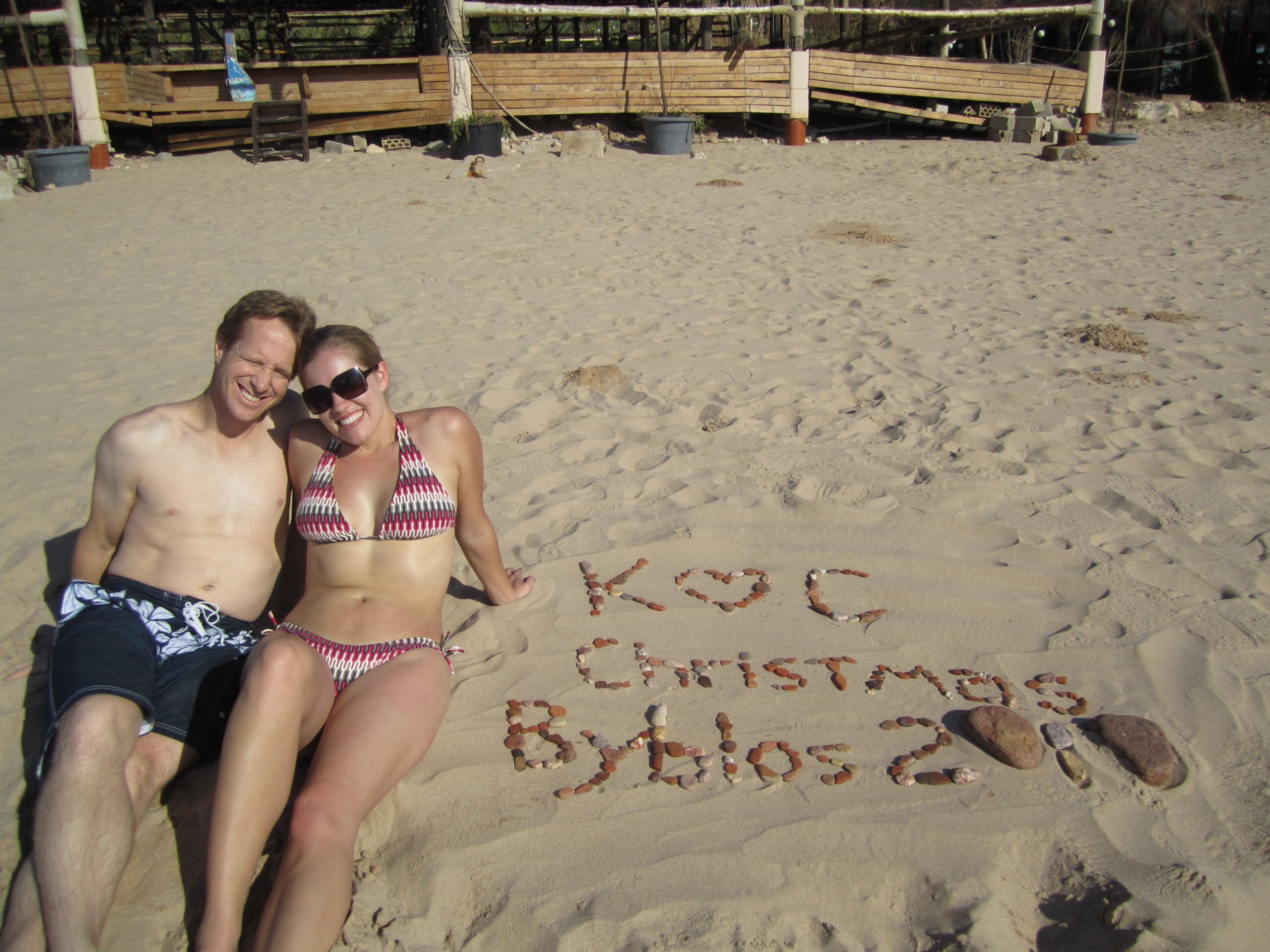 Celebrating Christmas around the World with my hubby holds so many sweet memories.

My sweet hubby and I were professional acrobats and spent a lot of years touring the country and the world. We have spent Christmas together in several different countries and unique cities around the world. Today we are talking about what it was like to spend Christmas and New Years in the Middle East, China and around Europe to name a few!   Though it wasn’t something we planned, it was an extra Blessing from the Lord to have these memories and perspectives.

Lebanon was not on our list of places we wanted to travel, and certainly not at Christmas time. When we got the opportunity to go their for work we tried to make the absolute most of it!

It was incredible to be on that side of the world for Christmas, 150 miles from Bethlehem! Listen in to the Podcast for more on this incredible adventure of spending Christmas in the Middle East!

Our show brought us to Thessaloniki Greece (Yes the same place Paul wrote the letters we know as 1 and 2 Thessalonians to the Christians living there). We then Flew to Belgium to spend Christmas with our friends the Eveland’s (You can listen to my interview with Lisa Eveland about being a Military wife and her husbands 7 deployments –Episode #5). We then flew to Sweden to visit my husbands cousins where we dove into the snow in bathing suits in below zero weather after sitting in their sauna. On New Years Eve we flew to Paris to ring in the new year at the Eiffel tower! Hear more about it on the Podcast!

Christmas and New Years in NYC

We got to spend Christmas and New Years in Hong Kong in December 2019! Yep, we are well aware that sounds pretty sketchy but we love that we got to see that part of the world before things got really weird. On Christmas day we were actually rehearsing which was kinda hard, which we talk about. Like the other places we have been so blessed to visit we always make the most of it. One of the crazy things we accomplished was visiting both Hong Kong Disneyland and Disneyland USA on January, 1 2020! You can hear all about it on the Podcast!

What we have learned from celebrating Christmas around the world

Family Christmas traditions are important, yet we have learned that it’s not the exact date that makes it special but celebrating it. (You can listen to Episode #15 on Christmas Traditions with my Mom Here)We have seen so many cultures celebrate Christmas, and have seen Jesus in every one! He is the reason for it all!

I’d like to end with the Good News of Jesus as read here from the Bible in Luke’s Gospel:

‘And it came to pass in those days that a decree went out from Caesar Augustus that all the world should be registered. This census first took place while Quirinius was governing Syria. Joseph also went up from Galilee, out of the city of Nazareth, into Judea, to the city of David, which is called Bethlehem, because he was of the house and lineage of David, So all went to be registered, everyone to his own city. to be registered with Mary, his betrothed wife, who was with child. So it was, that while they were there, the days were completed for her to be delivered. And she brought forth her firstborn Son, and wrapped Him in swaddling cloths, and laid Him in a manger, because there was no room for them in the inn. Now there were in the same country shepherds living out in the fields, keeping watch over their flock by night. And behold, an angel of the Lord stood before them, and the glory of the Lord shone around them, and they were greatly afraid. Then the angel said to them, “Do not be afraid, for behold, I bring you good tidings of great joy which will be to all people. For there is born to you this day in the city of David a Savior, who is Christ the Lord. And this will be the sign to you: You will find a Babe wrapped in swaddling cloths, lying in a manger.” And suddenly there was with the angel a multitude of the heavenly host praising God and saying: “Glory to God in the highest, And on earth peace, goodwill toward men!” So it was, when the angels had gone away from them into heaven, that the shepherds said to one another, “Let us now go to Bethlehem and see this thing that has come to pass, which the Lord has made known to us.” And they came with haste and found Mary and Joseph, and the Babe lying in a manger. Now when they had seen Him, they made widely known the saying which was told them concerning this Child. And all those who heard it marveled at those things which were told them by the shepherds. But Mary kept all these things and pondered them in her heart. Then the shepherds returned, glorifying and praising God for all the things that they had heard and seen, as it was told them.’

If you would like more information on Jamie’s Song Writing and performing services you can ask Caroline on any of the above platforms listed for her official contact info.

How Endometriosis has impacted my life

Welcoming People in my Home and What Shaped My Perspective